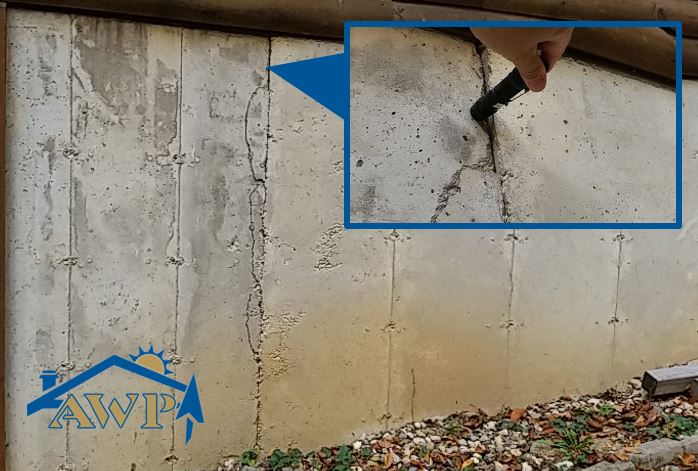 All concrete block foundations should be inspected for problems associated with settlement. Although serious settlement problems are relatively uncommon, uneven settlement can be a major structural problem in residential buildings.

Indications of settlement are vertical distortion and cracking of masonry walls, warped interior and exterior openings, sloped floors, and sticking doors and windows. Settlement most often occurs early in the life of a building, and when there is a dramatic change in underground conditions. Often, such settlement is associated with improper foundation design, particularly inadequate footers and foundation walls.

Other causes of settlement include:
•    soil consolidation under the footings;
•    soil shrinkage due to the loss of moisture to nearby trees and large plants;
•    soil swelling due to inadequate and/or blocked surface or house drainage;
•    soil heaving due to frost and excessive root growth;
•    gradual downward drift of clay soils on slopes;
•    changes in water table level;
•    soil erosion around footers from poor surface drainage, faulty drains, leaking water mains, and
other underground water movements.  Occasionally, underground water may scour away earth
along only one side of a footer, causing its rotation and the subsequent buckling or
displacement of the foundation wall above; and
•    soil compaction and movement due to vibration from heavy equipment, vehicular traffic,
blasting, and/or from ground tremors (earthquakes).

Rapid settlement produces cracks that taper, starting large at one end and then diminishing to a hairline crack at the other end, depending on the direction and location of settlement below the wall. Cracking is most likely to occur at corners and adjacent to openings, and usually follows a rough diagonal path along mortar joints, although individual masonry units may be split.

Settlement cracks (as opposed to the similar-appearing shrinkage cracks that are especially prevalent in concrete block) may extend through contiguous building components, such as floor slabs, masonry walls above the foundation, and interior finishing. Tapered cracks, or cracks that are nearly vertical and whose edges do not line up, may occur at the joints of projecting bay windows, porches, and additions. These cracks indicate settlement due to inadequate foundations or piers under the building component.

Usually, settlement slows a short time after construction. Minor settlement cracking is structurally harmful only if long-term moisture leakage through the cracks adversely affects the building components. Large settlements, particularly between foundation walls and interior columns or piers, are more serious because they will cause movement in contiguous structural elements, such as beams, joists, floors and roofs.  These elements must be evaluated for loss of bearing and, occasionally, fractures.

Should strengthening of the foundation be required, it can be accomplished by the addition of new structural elements, or by pressure-injecting concrete. It is possible that the problem can only be rectified by under-pinning. Older buildings with severe settlement problems may be very costly to repair.  In such cases, you will need the advice of a structural or soil engineer. [Nachi, Foundations Walls and Piers]